J and I were fortunate enough to have a contact in Boston to stay with….Carl and Julia Kinkel. They were the most gracious host and hostesses and opened up there home and arms to us.

Carl made his famous Huevos Rancheros for brunch Sunday. Keep in mind this is probably something I would have passed on, choosing something less fiberous and spicy, had I been planning on running the whole 26.2 miles the next day….however I did pass on the beans… because as I mentioned before something in the back of my head was telling I was going to be able to.

We joked at brunch that this would be great “jet fuel” for the marathon. I made a comment that mine was “unleaded” (no beans) and J’s and Carl’s was “diesel” (beans). We shared a good belly laugh. 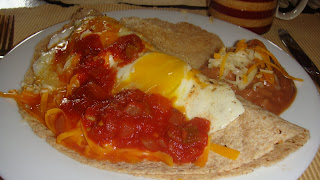 This dish is in the classification of “Refrigerator Management”- ie. Use what you’ve got and help clean things out of the fridge.

In general…Huevos Carlos consists of a flour (whole wheat) burrito/ wrap shell filled with “stuff” and folded in half. Topped by one or two sunny side up eggs… sprinkled cheese (Cheddar, Jack, whatever)… some Pace Picante sauce lavishly poured on the top. Sides can be beans (refried, regular, black), Rice (grits or Quinoa), and some iceberg lettuce sliced with an orange slice… fruit, etc.

Here’s what we made for Sunday morning brunch the day before the Boston Marathon so that Sara would have the extra added benefit of Jet Propulsion.

Stuff for inside the half folded Burrito Shell
Cooked up a bunch of Jimmy Dean Sausage (hot)… then added a can of Old El Paso Enchalada sauce to the sausage. We had some Taco Seasoning… so we added that as well… then about an equal amount of Swiss Cheese… or anything you have (a can of queso works as well). For a veggie alternative… onions, green peppers, beans, tomatoes, etc. work great. Simmer it all.

Grits
These were terrific. Regular grits following the cooking recipe on the canister. Add Some Chili Powder and Cumin to taste… 2 to 1 Chili powder to Cumin. Should just turn the Grits a yellow/ orange/ brown color.

Beans
We opened a couple of cans of refried beans and heated it up. Then added a bit of cheese to the top. Don’t doctor up the beans… it’s the one thing that you should leave bland.

Eggs
2 are best… Sunny Side Up. Placed on top of the half folded burrito with the stuff inside. Sprinkled with cheese… and Pace Picante Sauce. Then popped into the microwave for 30 seconds to melt the cheese.

Add Beans and Grits… and garnish. And Serve.
Good with Orange Juice!

Now Sara has the “Umph” to make it the 26 miles from Hopkinton to the Common… watch out for Chestnut Hill !!!! It’s a heartbreak. You’ll need the Rocket Fuel. 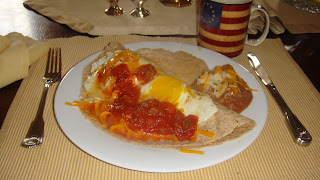 Carl- thanks for sharing your delicious recipe! It was sooo yummy, hope everyone enjoys!

Until next time…
look good, feel good, do good
https://davissportsnutrition.com/